Many areas in Syria have been under siege for over three years, this has led to instability in the funding of medical projects due to difficulty of access, inflation of prices, and the reluctance of many international organizations to operate in besieged and dangerous areas.

Hospitals and medical facilities witnessed unprecedented, systematic targeting and bombing that has led to partial or complete halt of the provision of medical services in many locations, and the loss of large numbers of medical staff either by impeding injuries and death, or migration of staffers to safe areas.

Over the past three years 76% of UOSSM's work is through the following projects, to enable, rebuild and strengthen the healthcare sector:

Support of Hospitals and Post-Operative Centers- The support of hospitals is considered one of the top priorities of UOSSM. Since the beginning of the crisis in Syria, funds were allocated to support and rebuild affected hospitals, completely support UOSSM Bab Al-Hawa Hospital and Al Bernas Hospital in the Northern region in Syria, and post-operative centers in Sarmada and Reyhanli. 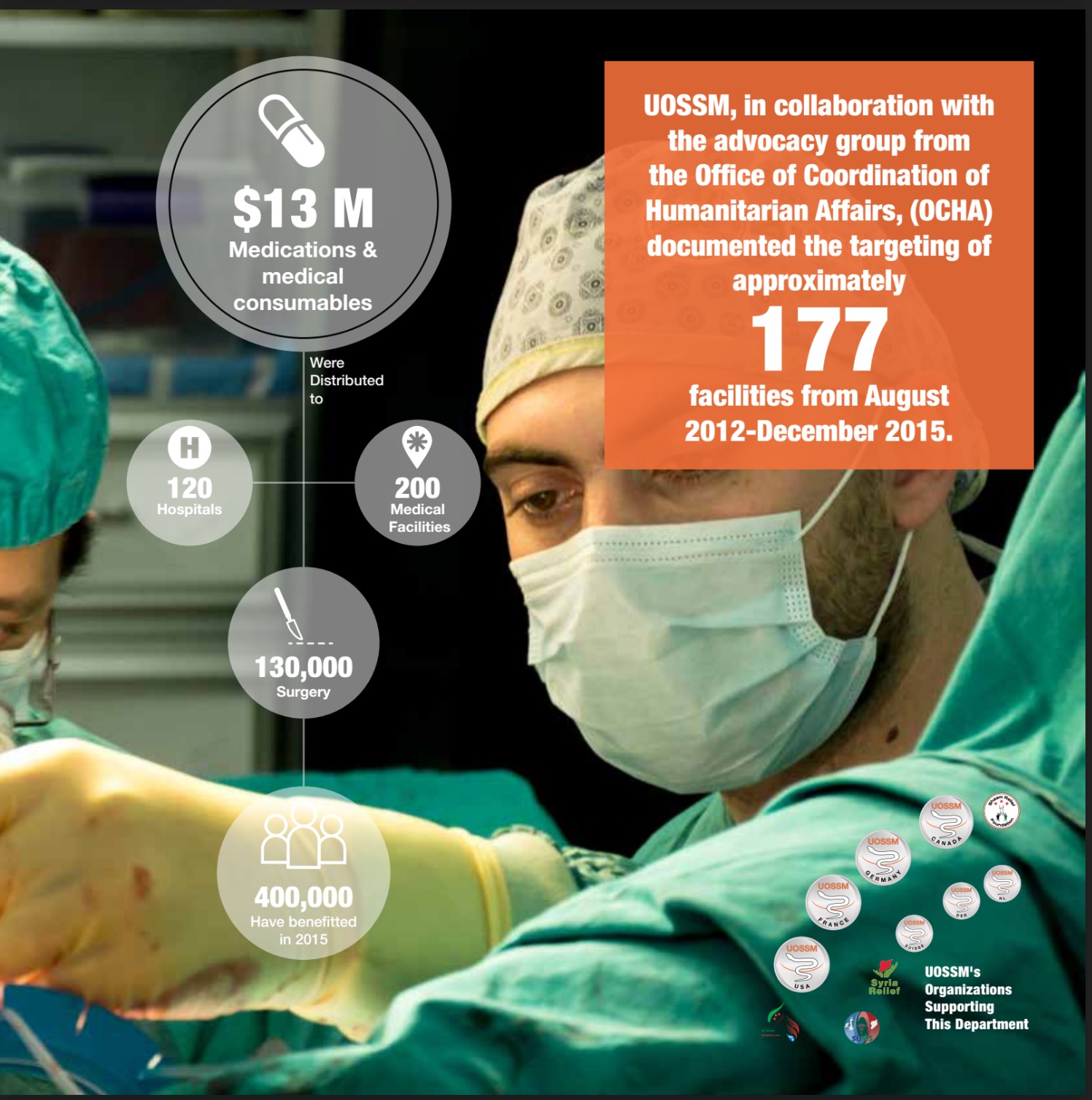 One of UOSSM International's major initiatives is the establishment of Bab Al-Hawa Hospital (BHH), which launched its initial operations at the end of 2012, currently considered the largest emergency and specialty referral hospital in northern Syria.

With its six operating rooms, adult and pediatric Intensive Care Units (ICUs), and specialty outpatient medical departments, BHH has the capacity to provide emergency triage and lifesaving surgeries, but also conducts many specialized surgeries and provides specialty medical services to thousands of people on a monthly basis.

The hospital provides a broad range of specialty medical and surgical services including general, thoracic, vascular, orthopedic, neuro, urologic, ophthalmic, maxillofacial, E.N.T and pediatric surgeries and medical care, in addition to, dialysis, outpatient cardiology, colonoscopy and others. Within BHH lies the largest blood bank in the area, producing 1000 blood bags, with different blood components, per month to hospitals and medical points in the region. On average, BHH conducts over 900 major surgeries and provides medical services to over 10,000 patients per month.

UOSSM International supports Al Bernas Hospital, in northern Syria. The hospital provides Obstetric/Gynecological and Pediatric services, along with General surgery. In 2015 the hospital provided services to 37,813 patients including a total of 2430 natural deliveries in the maternity ward and 1200 Cesarean section deliveries.

One of UOSSM’s major initiatives is the establishment of the post-operational, rehabilitation center in Reyhanli, Turkey. Since June 2012, SMC has expanded its services to include both inpatient and outpatient departments (Ob/Gyn, Orthopedic, Cardiac, Pediatric, General Medicine and Psycho Social Support), providing quality wound care, physiotherapy, psychotherapy, medical therapy, urological care to spinal cord injuries, radiology, and cardiac echography, in addition to laboratory and pharmacy services.

It provides complimentary healthcare services to more than 130,000 Syrian refugees in Reyhanli and it also has an office for documenting human rights violations, in coordination with Physicians for Human Rights.

Sarmada Post-Operative Center is located in Idlib suburb inside Syria, was established in the end of 2014. Under the management and supervision of UOSSM, the center provides medical and rehabilitation services, minor surgeries,and firs aid to civilians with war-related injuries, with a capacity of 60 beds. Wound-care, physiotherapy, and psychotherapy are provided along with other medical healthcare services. Most of its patients come from UOSSM Bab Al-Hawa Hospital for post-op care.There are a total of five patient rooms where patients are provided with three meals a day.

Dar Al Karama Center is located in Daraa suburb, in the Southern region of Syria. It is equipped with 71 beds and it provides medical healthcare services to an average of 1,950 patients on monthly basis.

One of the earliest UOSSM’s initiative is the acquisition of distribution of medical equipment, supplies and medications to medical points and hospitals across Syria. With a total budget over 8 Million dollars, UOSSM International has distributed medical consumables to 120+ hospitals and 200+ medical points and health clinics across Syria, last year.  It covered more than 65% of overall medical consumables needs in northern Syria.

With the collapse of the healthcare system in Syria, UOSSM International introduced the first electronic data collection system, in 2013, at many hospitals affected by the crisis, including Bab Al-Hawa Hospital; when no other such system was in place, at the time.

This system, with its underlying devised coding system, has been providing valuable source of info to optimize resource allocation to the different hospitals (i.e., effective and efficient delivery of medical aid). In addition, the EMR system is intended to be used, with its built-in variables, for research and quality improvement objectives and is the basis for UOSSM’s Hospital Support Initiative; ensuring sustainable quality surgical hospital work.

The EMR includes, but not limited to, patient demographics, ER and hospital admissions, types of injuries, types of surgeries & procedures, complications, ICU admissions, & discharge status. Currently, data are maintained from over 50 surgical hospitals inside Syria.

This initiative was started shortly after establishing the EMR system in 2013, to support the work of hospitals and medical staff, inside Syria, to:

To ensure consistency, the Hospital Support Initiative was built on the devised coding system for hospitals and certain inclusion criteria, including surgical work volume (i.e., number of major surgeries per month), existence of main surgical services, availability of specialized surgical or hospital staff, and absence of financial support by other organizations.

Until October 2014, this initiative provided hospital support to over 50 LOCAL hospitals across the country, serving tens of thousands of patients and conducting over 3000 major surgeries on a monthly basis. Each major surgery was evaluated to cost about $100 per surgery, at the time. Currently, this initiative is on hold, awaiting funding.